Can Millennial Guess Prices From the Past? [Infographic] 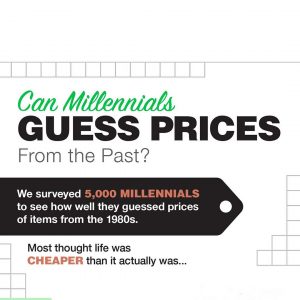 podcast | Skillz Middle East
Can Millennial Guess Prices From the Past? [Infographic]

Combatting the rising cost of living, a millennial is quick thinking that their parents or baby boomers had easier lives. With the rising cost of , education, technology, and real estate it’s easy to understand this perception. Unlike the majority of millennials, baby boomers were financially independent and even buying their first homes in their early 20s. The average first-time homeowner today is approximately 33 years old.

Luke Fernandez runs Growth at Wikibuy, a consumer product that helps shoppers know when, where, and what to buy. As a Product and Growth leader, Luke has helped Fortune 500 companies and startups alike drive best-in-class marketing through technology and data.
Luke Fernandez

From a Millennial’s point of view, everything is more expensive in the 21st century. Gone are the days of blue-collar workers’ ability to afford financial investments and property. Working full-time at minimum wage today is barely enough to push an individual over the poverty line. The value of a currency and material items have indeed changed since the previous decades, but do millennials understand by how much? In order to discover how well the millennial generation interprets past monetary value, Wikibuy surveyed 5,000 American millennials on prices of items from the past.

The survey was comprised of questions regarding the prices of five items in the 1980s (a Portable color TV, a Walkman, ab Apple Macintosh, a movie ticket, and a Nintendo), not adjusted for inflation.

A grand majority of those surveyed largely underestimated the actual cost of items in the 1980s, frequently choosing the answer containing the lowest price. Millennials on the upper end of the generation’s age spectrum tended to guess prices more correctly. The most shocking statistic from the study is the portion of millennials that failed to correctly guess the price of a 1980 Walkman and 1985 Nintendo, 92 percent and 87 percent respectively. concluded that most millennials assume life was exceedingly cheap in the ‘80s. Out of the five items polled, nearly half (approximately 2,500) of the millennials guessed the lowest possible price for each item. This study shows that while items were cheaper in the past compared to today’s counterparts, Millennials’ view of the cost of living during that time is widely skewed. The cost of education is a large contributor to millennials’ perception of prices in decades past. As the generation enters the workforce, many are shackled with debt. Since low-paying jobs no longer offer comfortable lives as they could in the 1980s, most millennials feel pressured to attend university in order to get a better job and, therefore, a better life. In 2010, the average tuition at a public 4-year college was almost $8,000. This is nearly four times the tuition costs in 1980. Their thought process is most likely that if education was so severely less expensive back then, everything else must have been, too. Millennials’ predecessors didn’t have to deal with insurmountable students loans. They didn’t have to juggle higher education with a job or two. Life must have been easier (and cheaper) when you could get a job, house, and comfortable life basically straight out of high school. Not only is their perception of money distorted, but their attitude and use of it differs from their parents and grandparents. Money isn’t as much of a stigmatized conversation topic; the millennial generation is usually open to financial discussions. Furthermore, millennials are more likely in fact they prefer, to spend money online. The generation puts more emphasis on small luxuries and experiences. They’re more likely to spend money immediately, a stark contrast to previous generations’ will to save. Check out the comprehensive infographic below to see the findings detailing how much millennials think items cost in the 1980s.