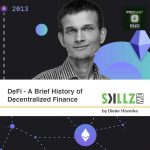 2019 the Bitcoin Protocol laid the foundation for a new era of peer-to-peer financial services. Ethereum was the first smart contracts-powered blockchain and the platform on with the Maker Protocol built. The good news is that Ethereum offers the ability to execute the kind of complex functionality required by modern finance applications which use decentralized finance (DeFi).

Today, nearly 6 years after the launch of Ethereum, the Ethereum blockchain hosts an over $42 billion ecosystem of decentralized applications that provide wide-ranging services previously available only to wealthy or institutional investors.

Today we want to take a step back and explore the history of decentralized finance (DeFi), and why many see the importance in it for the future of finance.

In December 2014 MakerDAO is founded by Rune Christensen, Nikolai Mushegian, and others. It would eventually become one of the first decentralized autonomous organizations to launch on the Ethereum blockchain.

4 months later on March 26, 2015, Rune Christensen introduced eDollar, the precursor to Single-Collateral Dai, built on a testnet for the
forthcoming Ethereum platform.

Shortly after on July 30, 2015, the Ethereum blockchain launched. The whitepaper was published two years earlier and one year after being crowdfunded and the sale of 60 million ETH for a total of 31,500 BTC the launch was done. The launch makes trustless computing a reality and sets the scene for the creation and release of decentralized applications (dapps).

Nearly a year later on April 30, 2016, a decentralized autonomous organization known simply as The DAO (no relation to MakerDAO) launches with a token sale on Ethereum. Slock.it acquired later by Blockchains, the software company behind The DAO, which designed it to operate as a community-run investment fund.

Through its crowdfunding effort at launch, The DAO, the first of many DAOs to come, raises more than 11.5 million ETH worth $150 million. The project’s code was later exploited, eventually leading to its demise and the famed Ethereum hard fork, which resulted in two competing chains, Ethereum and Ethereum Classic.

In the same year in the middle of 2016 OasisDEX (now Oasis.app), the first decentralized exchange on Ethereum was launched.

2017 was the year of the Dai Stablecoin Systems. End of the year on December 19, 2017, a Single-Collateral Dai (SCD) was launched on the Ethereum mainnet. Users of the Dai Stablecoin System (now known as the Maker Protocol) are able to generate Dai tokens against ETH collateral. SCD provides proof of concept for the idea of a decentralized stablecoin.

What is a stablecoin? Stablecoins are cryptocurrencies where the price is designed to be pegged to a cryptocurrency, fiat money, or to exchange-traded commodities.

The DeFi ecosystem starts to expand as more dapps launch on Ethereum:

On September 27, 2018, Compound Finance launched. By 2020, Compound would popularize borrowing one digital asset against another locked as collateral, charging variable fees, and offering rewards to liquidity providers based on supply and demand.

Memorable also the launch of Uniswap on November 2, 2018. The Uniswap decentralized exchange (DEX) popularized the Automated Market Maker (AMM) model for DEXes in the crypto space, using liquidity pools and algorithms to set trading prices instead of the order books used by centralized exchanges. While numerous other DEXes, including Curve SushiSwap, and Balancer, would gain traction, Uniswap would quickly become the most popular.

The innovations did not stop, November 18, 2019, Multi-Collateral Dai (MCD) is launched, enabling anyone to generate Dai against any of the digital assets in the Maker Protocol’s diversified portfolio. The launch sets the stage for the Maker Foundation to accelerate its work toward its long-promised dissolution.

A day to remember, by September 11, 2020, Total Value Locked (TVL) across all DeFi protocols exceeds $10 billion for the first time.

On December 1, 2020, Ethereum 2.0 (Phase 0) launched, marking the first stage of an ambitious series of upgrades to enable DeFi to scale on the platform and improve the network’s security, sustainability, efficiency, and decentralization.

DeFi embodies a global ecosystem of open, trustless financial services hosted on the Ethereum blockchain. The DeFi movement is poised to expand further in the coming months and years, with new dapps and new use cases built on the solid foundations established as of the end of 2020:

“DeFi inherits blockchain’s characteristics of transparency, security, immutability, and efficiency, meaning that any CeFi service that integrates decentralized technologies has the potential to create new benefits and opportunities for its customers.” Steven Becker, President and COO of the Maker Foundation.

The Benefits of DeFi

Investors can have more transparency, higher security, see the benefits of having a system which immutable, composable, and permissionless.

DeFi stands for Trustless, Open, Efficient and compared to CeFi which is more trust-based, exclusive, slower and more expensive.

“I’m very excited about the potential DeFi offers in principle. The idea that just anyone, anywhere in the world, can have access to a system that lets them pay each other, and choose their own financial exposure, is a really powerful thing. It’s something that a lot of people don’t have access to.” Vitalik Buterin, co-founder of Ethereum, Ethereal Summit 2020

In the infographic below you can see some samples in the Ethereum universe for payments and savings, asset trading and liquidity provision, borrowing and lending, yield farming, and some emerging user cases.

The infographic was put together by MakerDAO.