How the World Wide Web Is Benefiting Seniors [Infographic] 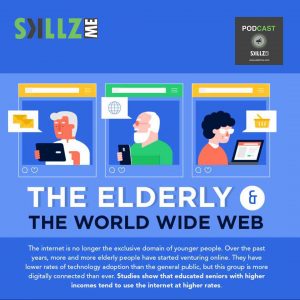 There is no denying that the internet revolution has made the world a tiny village so to say. The internet, as we know it, has made a lot of processes simpler especially in the sector of information dispensation. How are can we see that the world wide web is benefiting seniors in their daily life, the answer might give us today’s post.

Nikola Djordjevic, MD, Head of Content at MedAlertHelp.org. Coming from Serbia, Nikola is a doctor of medicine who started this project in 2018 out of his passion for helping others, particularly seniors. Apart from reviewing medical alert systems, he also writes a blog dedicated to health, aging, retirement, and other senior-related topics.

Seniors and Internet
Likewise, the internet usage statistics based on age have always indicated a higher usage among the youth compared to the senior citizens.

However, recent statistics show that there are a lot more elderly people using the internet currently as compared to a decade ago. Surprisingly there are areas where people aged over 55 years tend to use internet enabled devices more than the Millennials as depicted in a detailed blog published on Medalerthelp.org about the elderly & the world wide web.

This means that a lot of senior citizens are now experiencing the dynamics of the internet worldwide and that young folks do not have a monopoly on internet usage anymore. If you are wondering what the elderly use the internet for, we have a brief overview of that in today’s post.

Reasons for Using the Internet Among Seniors

The world wide web has made it possible for people to communicate while physically present on different continents. Well, the elderly were not going to be left behind on this. In fact, this is one of the main reasons seniors use the internet.

In the early 2000s, the rate of adoption of the internet was quite low probably due to the inability to afford internet gadgets. As these devices became more affordable, more and more people were able to use them. The social usage of the elder generation climbed over the last years since the birth of the world wide web 30 years ago and we can see how it is benefiting seniors.

According to the statistics found in the infographic summarized, people over 55 years of age use the internet for a number of tasks. This includes sending and receiving emails, an activity popular among 20% of grandparents. And if you thought Millennials represent the most smartphone-based users, you’d in for a surprise because the smartphone usage for emails is highest among folks aged over 55 years compared to those aged between 35-44 and 45-54 years.

Another interesting fact about smartphone usage is in terms of making phone calls.

The elderly are the highest smartphone users in making phone calls and the statistics place them at 35% compared to 28% and 20% for those aged between 45-54 and 35-44 years respectively.

While it might be difficult getting to learn how the internet operates, with some help, our grandparents are able to easily master the art of using the web. It is no surprise, therefore, that some of them even book air tickets online.

Internet usage among the younger generations lies heavily on social networking sites but we might argue that seniors have found a more all-around application of the internet. Their usage of the internet varies widely from looking up health topics of interest, reading political news, finding weather updates, locating shopping stores, participating in online auctions, and even taking online courses.

It is interesting to note that our senior citizens are embracing technology but the unfortunate thing is that a few are still left behind. Those who are unable to use the world wide web quote physical challenges as one of the reasons for not using it. You can read all the statistics and details summarized in the infographic “The Elderly & the World Wide Web” and learn what is benefiting seniors the most.